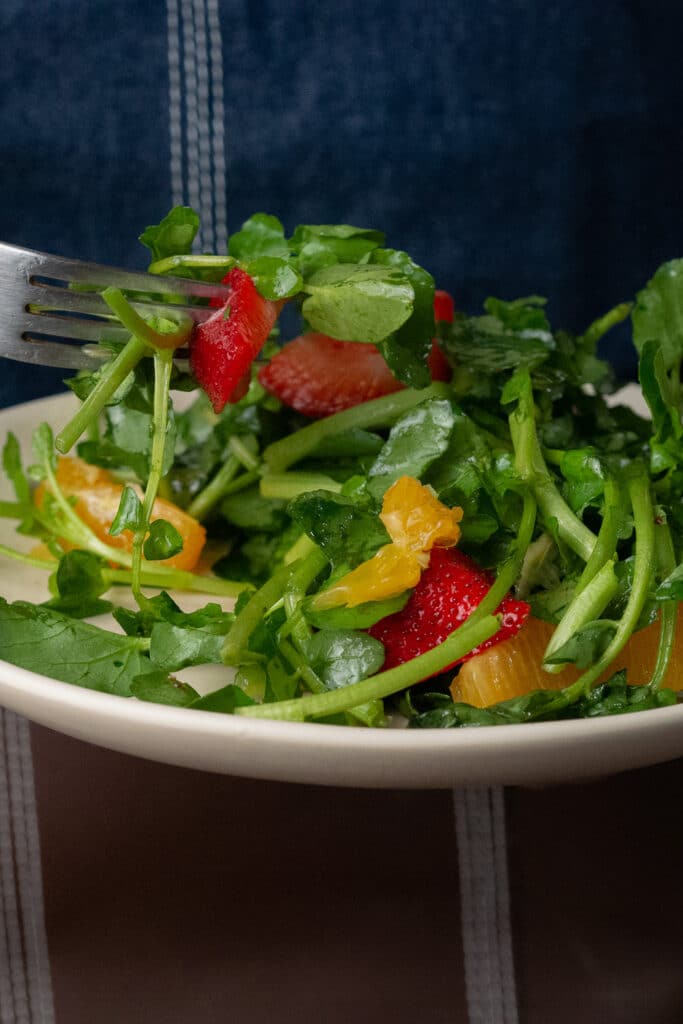 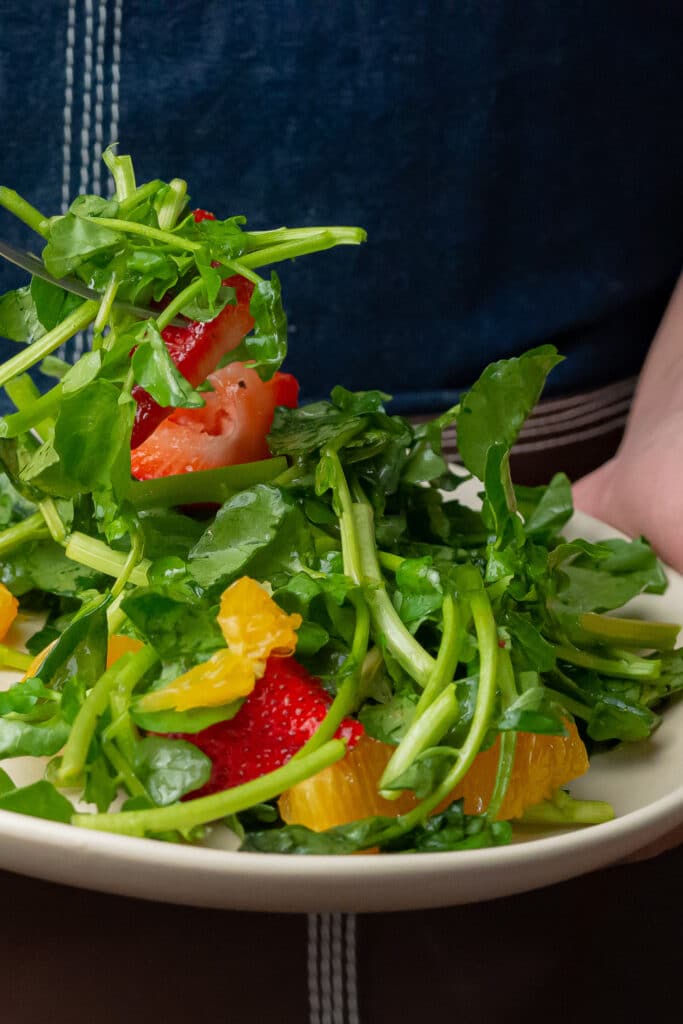 A watercress salad is not something you could easily find in a salad bar, but its peppery bites and crunch make it one of the most delicious and healthy salads around paired with a little sweet and tangy vinaigrette.

Is it better to eat fruit before or after the meal? According to Dr. Sara Testa, Nutritionist at Humanitas Hospital said," Preferably, fruit should be eaten before the two main meals because the fibres it contains help reduce the absorption of simple sugars, thus reducing the glycemic index of food."

Obviously, this watercress salad with oranges and strawberries is like the key to the gate of the good life- Gush, am I overly exaggerating? Hmmmmm......

This watercress salad recipe is a great extension to your salad repertoire in addition to this healthy joy of kale and sweet potato salad with tarragon vinaigrette on this site, and pairs well with this flavorsome Irish-inspired Guinness beef stew as the main course.

Watercress is a creeping perennial that thrives alongside or in fresh running water. This reminds me of when I was at the university back home, watercress is one of the cheapest and most affordable vegetables we always buy. It was bliss then, that we never knew what a watercress salad was all about, instead, they're meant to be eaten cooked.

Holy shit! Now I thought about it for a second, I have to admit, Some watercress we used to eat before might have been harvested in Balili River which used to be classified as class A in the '70s and in 2004, it was classified as Class D, literally means a "dead river" due to unabated dumping of wastes in the river system. If you look at it, it was a beautiful, robust bed of watercress camouflaging unimaginable what's underneath (no offence, I understand everybody has to do something in order to live). Again, that was two decades ago. Today, you wouldn't see any watercress anymore in that river (thank goodness). Sure it got worst, but I hope someday, there will be an established water treatment and people will be more aware of the environment. Thus, the Balili River will come back to life!

If you look at the nutritional label, it doesn't show any vitamins, calories or even minerals. Its potential health benefits are found in a substance called acetic acid that occurs during fermentation but isn't part of the nutrition label. Raw apple cider vinegar contains natural probiotics which may help with our immune system and gut health. It has antioxidants, a substance that can prevent damage to our body's cells.

Ingredients you will need

Now you know that this watercress salad recipe is not only refreshing and delicious but also leans towards one of the healthiest salads. So, let's jump in.

How to make watercress salad?

This watercress salad is done in less than 10 minutes. Make the apple cider-garlic vinaigrette- place them all in a lidded jar, seal tightly and shake to emulsify.

For the salad, Wash, trim and peel the vegetables and fruits. Put it all together in a nice serving bowl and then drizzle the vinaigrette as much as you want, according to your taste.

Hint: If you don't have apple cider, use white wine, red wine or lemon juice. Only drizzle the vinaigrette when you're about to serve, otherwise, the watercress and fruits will go limpy.

The joy of making this watercress salad recipe is, It doesn't require heavy equipment. All you need is a mixing bowl, paring knife and one lidded jar for the vinaigrette.

Salads and apple cider vinaigrette can be prepared ahead of time but vinaigrette must be kept In a separate jar until you are about to serve.

Apple cider-garlic vinaigrette can be kept in the fridge for up to two weeks.

There is no rule in making this watercress salad. Keep it simple without any fruits or use any fruits you have on hand such as pear, apples, mangoes, berries - almost all fruits can be added, 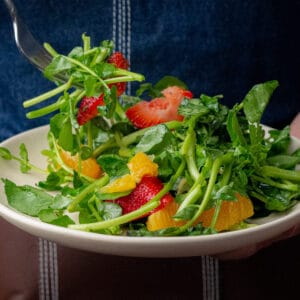 This simple and easy-to-make watercress salad is crisp and refreshing that pairs well with many meals you desire to have.
4 from 1 vote
Print Pin
Prep Time: 10 minutes
Total Time: 10 minutes
Servings: 6 serving
Calories: 199kcal

I'm a Filipina, former Elementary teacher and now a full-time cook/housekeeper-food blogger living in Ontario, Canada. The recipes you'll find here are a reflection of what I cooked and learned from all the families I worked for, more importantly, I'm a passionate home cook! Favorites include a picnic in the park, a big bowl of pho and jackfruit.