"Cinnamon is a familiar kitchen spice around the world, adding fragrance and warmth to everything from breakfast cereal, cakes and cookies to curries and roasts. But what most people don't realize is that cinnamon is also a potent, powerful, well-researched medicine." - Rosemary Gladstar, Herbalist and Author of Rosemary Gladstar's Medicinal Herbs: A Beginner's Guide.

It's cold out my friends! That's why this warming, drying, pungent and sweet spice-Cinnamon is a perfect addition to this cake. But don't get fooled, this coffee cake has no coffee in it. Coffee cake is a sweet cake that is topped with some kind of streusel and served along with coffee or tea. You know the first time I made this coffee cake, the man I love was so excited. He keeps asking what's in the oven, and I said "coffee cake" and he just wrinkled his nose dismissing me saying, what-ever you put in it doesn't agree with me. It took him a while to get convinced that coffee cake is as delicious as it meant to be. I asked why he rejects the beautiful complexity of coffee, he then declared, "coffee tastes like a soluble pain killer." He can't stand the bitterness. But he makes a great coffee every morning at home as he is surrounded by a caffeine-fuelled family while he drinks his tea, black tea and more tea. To me, I love the smell that fills my kitchen when he grinds my morning brew. I love the anticipation, the ritual as my coffee machine wakes me up slowly. I love the taste, the smoothness that glides down my throat with a slice of a nice sweet cake. I love the ease of trying something new at one of those cool independent coffee shops that make my day just feels right. while I'm writing this, someone asked what's in the oven and I said "tea cake"; At this time he can't be fooled anymore.

This richly flavoured coffee cake is very light and feels like it just melts in your mouth. There's a crunch on the outside from the streusel and with soft and moist interior crumbs. Finished with a dash of cinnamon and icing sugar, just a hint so that there is an intermingling fragrance of a freshly baked cake and sweet perfume from cinnamon to waft through your nose trills that give a warming energetics.

I'm fond of almond streusel. My favorite toppings for coffee cakes and any kind of muffins. Make extra, save the rest in the freezer for the next time you crave something sweet, which will give you a shorter time from prepping to eating another freshly bake cake with your coffee.

This cake is baked at a lower temperature so that it will not get overly brown. Baking using a convection oven will give a more domed top. I use full fat 5% yogurt ( my preference) but creme Fraiche or sour cream are spectacular to use as well. 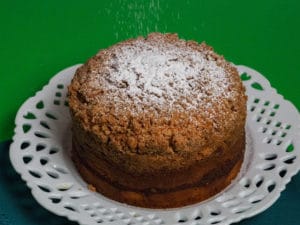 This wondrous cake is a surefire to brighten your morning, coffee time (tea time) or break time.
Print Pin
Calories:

Note:* over beating the eggs will lead to over expanding during baking then deflate. **Resting the batter before baking results in a moist cake, better crumb and enhanced flavor.
DID YOU MAKE THIS RECIPE?Tag @cookmejoyathome so we can admire your masterpiece!! 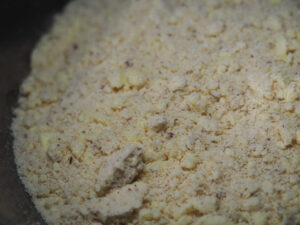 DID YOU MAKE THIS RECIPE?Tag @cookmejoyathome so we can admire your masterpiece!!
« Black-eyed peas and rainbow chard with marinara sauce
Wheat, barley -oat blend and mushroom soup »

I'm a Filipina, former Elementary teacher and now a full-time cook/housekeeper-food blogger living in Ontario, Canada. The recipes you'll find here are a reflection of what I cooked and learned from all the families I worked for, and all the food my family and I love to eat at home. Favorites include a picnic in the park, a big bowl of pho and jackfruit.

Help spread the word. You're awesome for doing it!