Three limes? This is about using kaffir lime leaf, lime juice, and lime zest. Kaffir lime leaf is responsible for the distinctive lemon/lime/mandarin aroma and flavour that is very precious in Asian cuisine, especially in Thai or Indonesian cooking. These leaves became a part of any Asian recipes that I make at home. From salad, soup, curries, stir-fries, marinades, and dessert. The leaves have that perfume that is sometimes mysterious but clearly an identity of its own. So when you spot a fresh kaffir lime leaf in the produce section when you're out grocery shopping, buy some.

Kaffir lime leaf stays good in the freezer. When you feel like having Asian food, throw some of it. Trust me, you will get inspired and use it more often. But don't get discouraged to make this soup if kaffir lime leaf is not available. Use regular lime zest instead, it is not as authentic as using the real leaf but you'll get a similar flavour.

Kaffir lime leaf blends so well with lemongrass and lime juice that gives the dish a very wholesome lemony essence. In salads, I use a fresh or frozen lime leaf - slice thinly, and scatter on top of the salad for a burst of flavour or blend it with the vinaigrette. For soups, curries, or stews; use whole fresh leaves, frozen or dried, and remove them at the end of cooking. Though, I always prefer chopping some fresh or frozen leaves very thinly and adding them before serving; you will benefit more from its haunting aroma and umami flavour that tickles the back of your throat while eating.

Chicken stock is what I like the most in any soup recipe. I always get that comforting and yummy feeling as you eat it. Throw any kind of herbs and spices, you will go right all the time. But it doesn't mean that this soup recipe is limited to chicken stock only. Fish stock, beef stock, or vegetable stock is really good too. Add chicken pieces or tufo, make it your own. 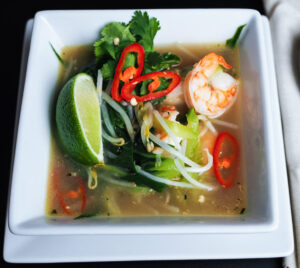 This hot and sour chicken broth with shrimp and vegetables is one of the most refreshing soup to be enjoyed any time of the year
Print Pin
Yield: 4 to 6 Servings
Calories:

Note 1: *Use 1 ½ tablespoon of lime zest instead, if Kaffir lime leaves are not available.  Add at the end of cooking. Note 2:  Chicken Stock Recipe
DID YOU MAKE THIS RECIPE?Tag @cookmejoyathome so we can admire your masterpiece!!
« Almond and Mixed Seeds Florentines
The Best Orange-Chocolate Biscotti »

I'm a Filipina, former Elementary teacher and now a full-time cook/housekeeper-food blogger living in Ontario, Canada. The recipes you'll find here are a reflection of what I cooked and learned from all the families I worked for, and all the food my family and I love to eat at home. Favorites include a picnic in the park, a big bowl of pho and jackfruit.

Help spread the word. You're awesome for doing it!